Go to the Italian version.

Here you have a detailed description of these twin new organs. One of them is now placed in Lisbon (Portugal). It has been nicknamed “il Lusitano” after the Portuguese composer Vicente Lusitano, who lived and taught in Italy. The second instrument is still under construction in my workshop.

The case has been built in three separate parts. Each one consists of frames of solid walnut with removable panels.
The cabinet has been treated with sealer, sanded and then polished with wax.
The approximate size of the cabinet is: height 220 cm, width 140 cm, depth 65 cm.
The left tower can be separated from the main unit, so to allow easy carriage.
The base is about 70 cm in height, the upper case is 145 cm tall (maximum height).

The facade consists of 25 tin pipes from the Principale 8′ (notes C 13-C37), 5 of the longest ones are placed in the left tower. The prospect is protected by removable panels.

Access to the inside of the organ is possible from the rear, by removing the panels.
Music desk is placed in front of the facade and has two possible positions: above the pipe-mouths or below them.
The cabinet is equipped with handles and the base has low and robust casters.

Keyboard: 51 notes (C1-D51). The keys are made of well seasoned spruce, without knots. The diatonic keys are covered with boxwood, and their fronts are decorated with arcades. The chromatic keys are made of ebony. Dimensions according to historical Italian models.
Transposition: sliding keyboard (a’ = 392 – 415 – 440 – 465 Hz at 20° C; 430 Hz can be obtained by retuning all the pipes).

The stop knobs are placed on the sides of the keyboard: bass and treble are paired on the same side, so that each half-stop can be drawn out by one same hand (Principale b./s., VIII b./s., XV b./s. and XXII will be placed on the right column; Regale b./s., Flauto in XII b./s., XIX b./s. and Cornetto on the left column); mechanical stop-action with aluminum rollers and wooden knobs.

Pull-down pedal board with 13 notes (C1-C13) has been built as a copy of a historical Italian model, linked to the keyboard by removable bindings.

Mechanical suspended key-action with wooden backfalls; auxiliary levers are placed under the pallet box to help tuning the pipes by oneself without assistance.

The slider chest has been built according to tradition, with a frame of solid oak. In order to ensure stability and resistance against moisture the table and the bottom of the grid, as well as the bars, are made of marine plywood. The pallet box is made of solid poplar wood, the pallets of spruce covered with felt and leather. Sliders are made of marine plywood and move between washers made of felt.
Wires and springs are made of brass.
The pipe-rack is made of solid poplar and is kept in place by wooden pillars. All the pipes are securely fastened to their support.

A noiseless electrical fan, suitable to the size of the instrument and protected by a soundproof box is placed in the base of the organ-case. Horizontal bellows placed in the basement, with one direct fold. The ribs are made of beech wood, the reservoir and the board of thick plywood. The joints are leathered.

Disposition:
Principale 8′ b./s.
Ottava 4′ b./s.
Flauto in XII 2.2/3′ b./s. cylindrical pipes
Decimaquinta 2′ b./s.
Decimanona 1.1/3′ b./s.
Cornetto 1.3/5′ conical pipes (treble only from C#26 with standard pitch A = 440 Hz)
Vigesimaseconda 1′ (without splitting)
Violoncello 8′ b./s. reed stop with short length resonators
Break point between bass and treble: C25/C#26 with standard pitch A = 440 Hz.
Pipe-scalings are derived from historical models of the Italian school.
The voicing has been realized with sober shallow nicking and moderately opened foot holes.
The wind pressure is 49 mm in water column.
All of the metal pipes are fitted with slide-tuners; the wooden open pipes are tuned with wooden flaps. 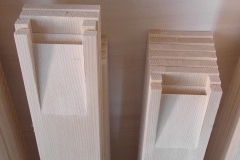 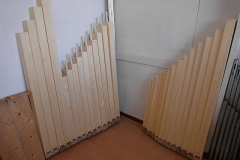 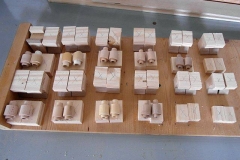 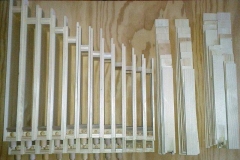 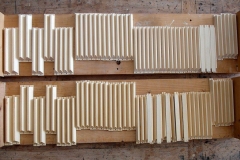 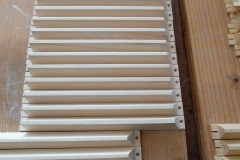 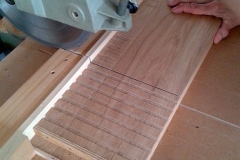 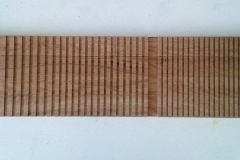 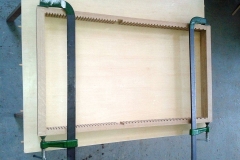 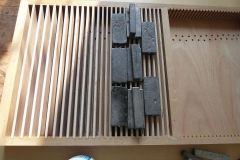 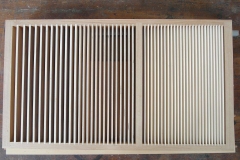 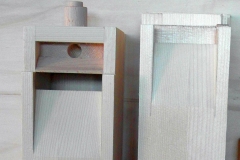 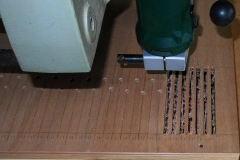 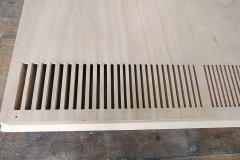 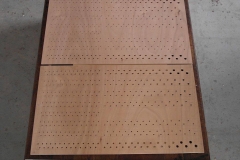 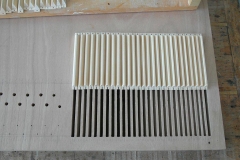 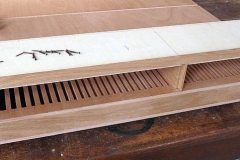 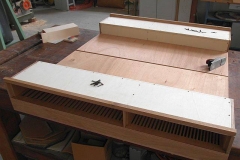 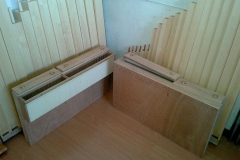 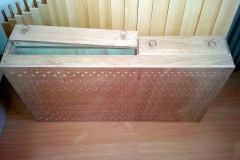