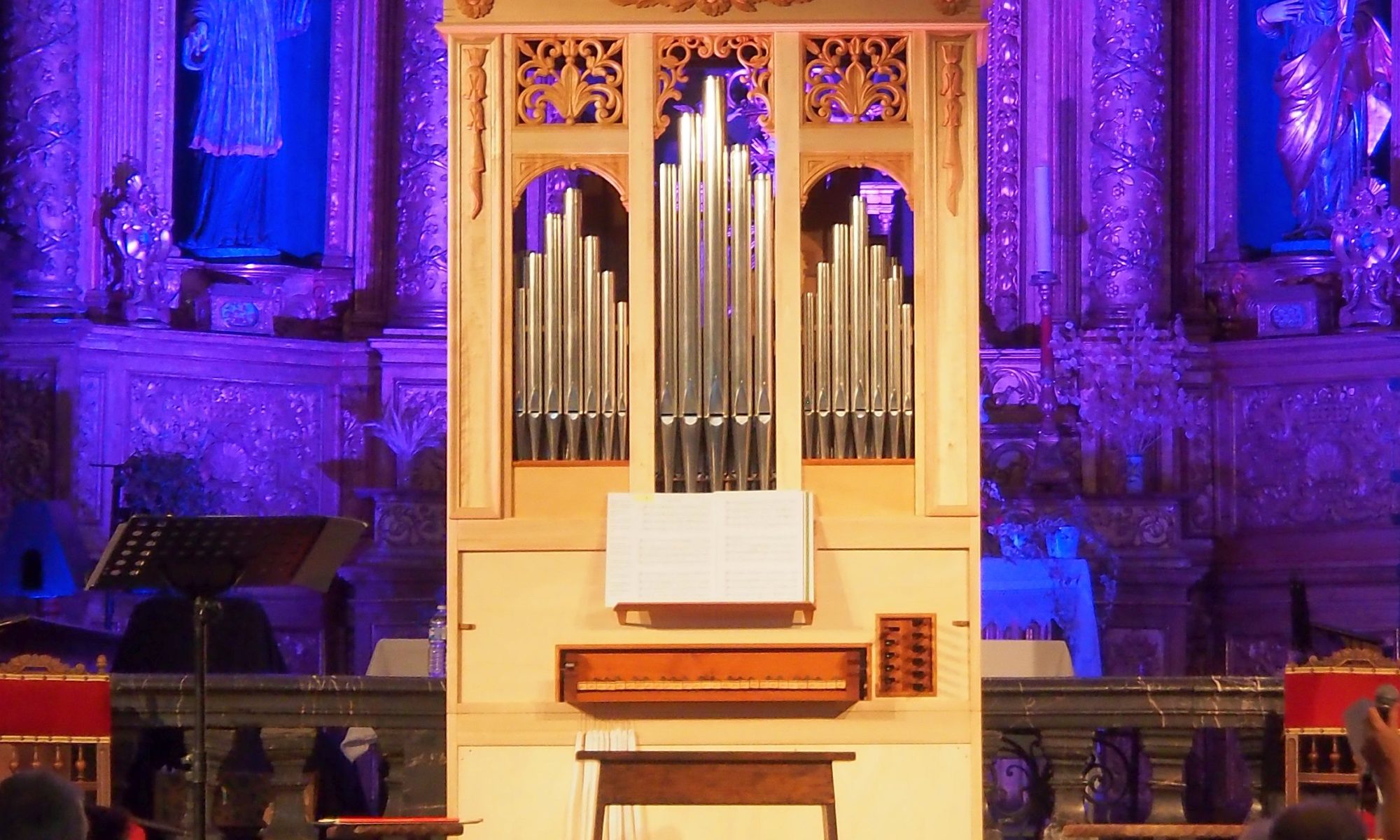 After the “Venetiano”, the “Vicentino” and the “Lusitano”, a new character has appeared on stage: the “Emiliano”.

This new positive organ is inspired by models of the Emilian school between the Sixteenth and Seventeenth centuries, suitably adapted to the modern needs (transposing keyboard, changeable tuning system, ease of transport). Some of these Bolognese models were particularly significant to me: the organ in the church of Monte San Giovanni (in the municipality of Monte San Pietro, Bologna) attributed to Paolo Cipri, 1578 and the organ in the church of Sant’Eugenio, attributed to Carlo Traeri, 1675. The small “organo ottavino” by Carlo Traeri in Montasico near Bologna suggested the bipartite layout of the wooden counter-façade.

The new instrument is built in three separable parts: a base containing the bellows, a front case with the prospect and the metal pipes, and a rear case with the larger wooden pipes, which constitute the so-called “basseria”. The two upper cases are held together by a crowning top. The cabinet is built with poplar and linden wood. The side panels are removable for instrument maintenance and tuning.
The façade consists of 19 tin pipes of the 8′ Principal I, divided into three flats of 7-5-7; the longest pipe in the middle flat corresponds to the note F18.
The low-pitched pipes of the first octave of the 8′ Principal I – Principal II and those of the 4′ Ottava – Flauto in VIII are in the rear case. The cypress pipes of the 8′ Principal II bass are arranged in the counter-façade.
The articulation of the façade and the carved decorative elements recall those of the organ by Carlo Traeri currently preserved in the church of Ravone in Bologna. The sculptor Sergio Bellani is the author of the fine carvings in “cirmolo” wood.
The keyboard has a range of 47 notes (C1-D5) with short octave. The body of the keys is made of spruce. The diatonics are covered with boxwood, with a decorated front face. The chromatics are made of ebony. Sliding keyboard transposition: 415, 440, 466 Hz.
The pull-down pedalboard has 9 keys, it’s made of cherry wood.
The suspended action is built with iron roller arms, wooden levers and brass tracker-wires.
The stop action consists of wooden levers, arranged in two columns to the right of the manual.
The slider chest has been made following the traditional criteria: oak for the frame and toe boards, linden wood for pallets and wind box, guides and springs are made of brass, pin pallets are leathered.
The wind chest has 49 channels: 47 are for ordinary notes (C1-D5 with first short octave), to which G#1 and D#5 are added for transposition to 415 and 466 Hz.
The 8′ Principale I is controlled by two slides: one placed at the front for the façade and internal pipes and another for the lower pipes arranged on the lower board of the wind chest toward the back. The two slides are commanded by a single lever.
The 8′ wooden Principale II is divided into bass and treble between the notes C3 / C#3, it shares the bass pipes with the 8′ Principal I; the treble section pipes can be tuned slightly sharp or flat in order to get the effect of Voce umana.
The Ottava and Flauto in VIII stops share the low-pitched pipes. They are therefore controlled by a single slide placed at the bottom of the wind chest.
Blower and bellows are located in the base of the organ.

The instrument was completed in spring 2022 and the final voicing took place with the collaboration of my colleague Marco Fratti and the organist Bernard Foccroulle in the church of Monte San Giovanni. The inauguration took place in France, at the end of July 2022, in the context of the Festival Baroque de Tarentaise with two concerts held by the Ensemble InAlto (Conflans and Villaroger).

Audio recordings and a photo gallery will be available soon. The construction of the instrument is described in the “Organo Positivo” album updated periodically on my facebook page.